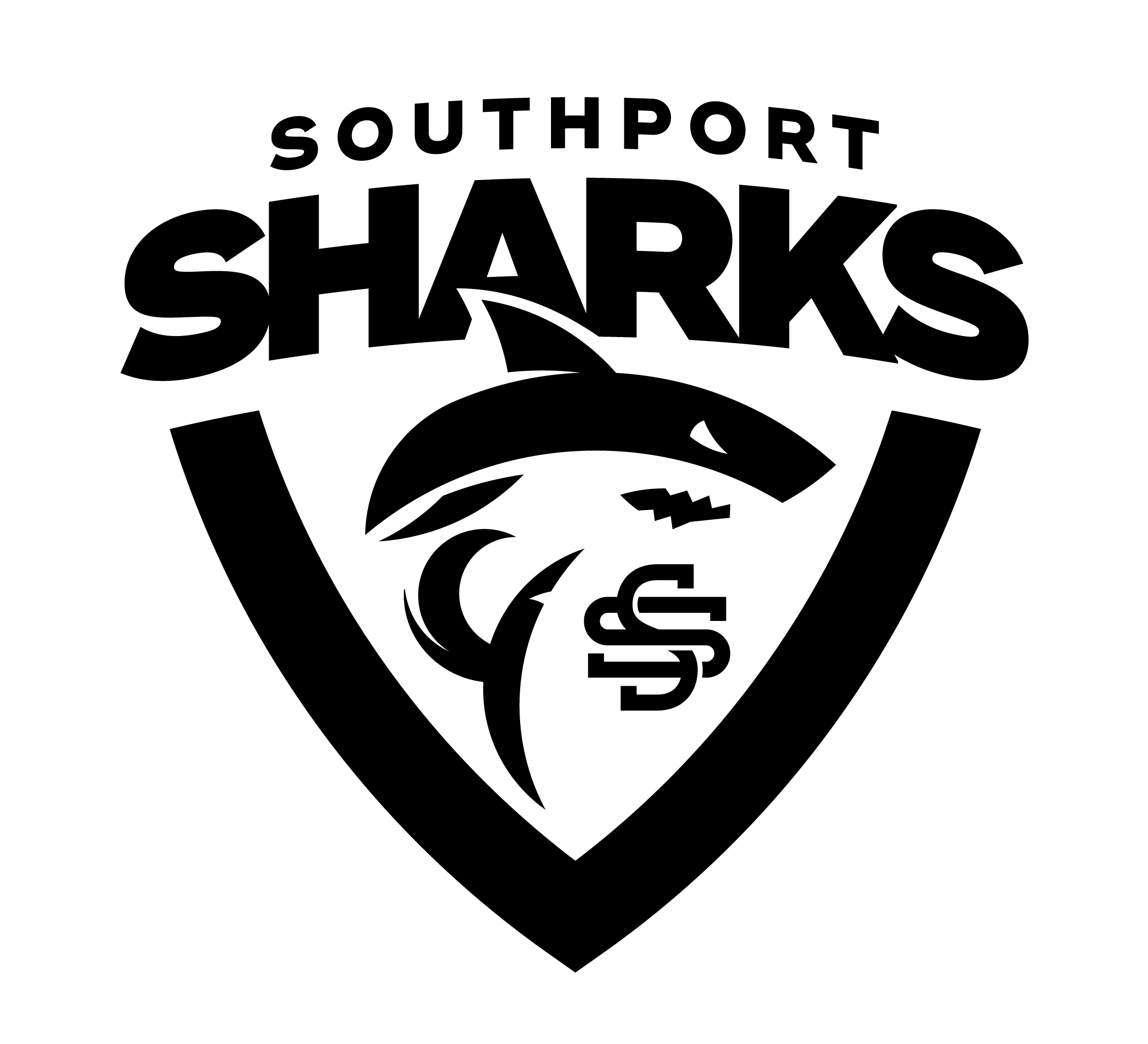 Southport Australian Football Club, nicknamed the Sharks, is an Australian rules football club based on the Gold Coast, Queensland, that competes in the Victorian Football League (VFL).

On 22 May 1961, the Southport Australian Football Club was formed and six days later the first training session was held at Labrador Sports Oval. It was revealed on 7 June 1961 that the club would be known on as the Southport Magpies and would wear a black and white vertical striped jumper similar to the Collingwood Football Club. In front of 1,000 spectators, Southport played their first ever game against Centrals Football Club on 25 June 1961. Southport came out victorious in their first outing 8.10.58 to Central's 6.11.47. They would then go on to win the first ever Gold Coast Australian Football League premiership with a 13-point victory over Ipswich on 25 September 1961.

Upon entrance into the Queensland Australian Football League (QAFL), the newly formed Southport Sharks were given little chance of success against the predominantly Brisbane based competition. In their first game of the 1983 season, the Sharks walked away winners with a victory over the Western Districts. They would compile a 12-6 win–loss record during the home and away season. The Sharks going undefeated through the 1983 finals series and would win the Grand Final by 13 points over Morningside. The Sharks would continue to prove themselves through the 80s with another three premierships added to their trophy cabinet as well as two runners-up. Early in 1989, the Sharks moved their headquarters to their current ground Fankhauser Reserve.

The club continued their dominance with an unbeaten season in 1990 but the club's financial woes were a big issue following a Grand Final loss in 1991. The club almost abandoned the QAFL late in 1991 to re-enter the Gold Coast Australian Football League, but Queensland's introduction of poker machines would secure the financial future of the Sharks. By 1995 the Sharks had reached 20,000 members began to lead the charge for a second Queensland team entering the Australian Football League. In 1996, the Sharks made their first bid to the AFL for inclusion in the national league, which was rejected by the AFL in favour of the Port Adelaide Football Club's elevation from the SANFL. After which, the club continued to lobby for a licence.

Following the AFL's rejection of the Sharks into the national league, the Sharks would set out to prove just how good they really were. The team would win three premierships in a row in 1997, 1998 and 1999 to finish off the millennium with success. In 1999 the Sharks were able to poach future St Kilda Saints star Nick Riewoldt from their cross-town rivals Broadbeach Cats, although Riewoldt would not compete for the Sharks senior side until 2000.

The Sharks would enter the 2000 season as the raging favourites to take out a fourth consecutive premiership. Soon to be number 1 AFL draft pick Nick Riewoldt would play a huge role in their Grand Final victory over the Northern Eagles. Riewoldt would be kept virtually touchless in the first half when matching up against future Brisbane Lions player Jamie Charman. Riewoldt was moved to ruck and would go on to kick two goals in the Sharks Grand Final victory. The four consecutive premierships would be Southport's last taste of success for five years as the club entered a rebuilding phase. Former AFL player Paul Dimattina pulled on the Sharks guernsey in 2005 and would lead the team to their first premiership in five years. The Sharks would continue their success with another three Grand Finals between 2006-2008 in which the Sharks would come away with two more premierships. In November 2010 it was announced the Sharks would be joining the newly formed North East Australian Football League which included four AFL reserves sides and local teams spread throughout Canberra, New South Wales, Northern Territory and Queensland.

The Sharks put together a 9–9 win–loss record in the 2011 NEAFL season but missed the finals series by percentage, their first non-finals season ever. The Sharks finished the 2012 NEAFL season with a 14–4 win–loss record and were placed third on the ladder. In the qualifying final, the Sharks fell to the Brisbane Lions reserves team but recorded their first NEAFL finals victory over Redland the following week. The Sharks faced the Northern Territory Thunder in the preliminary finals but lost by 37 points.

The club won its first and only NEAFL premiership in controversial circumstances in 2018, defeating Sydney reserves in the Grand Final. Southport dominated the game, and led 12.4 (76) to 2.4 (16) at three-quarter time, but then accidentally sent nineteen men onto the field to start the final quarter. Sydney called for a head count after twenty seconds and the extra man was discovered, which would traditionally have resulted in Southport's score being re-set to zero for the final quarter; however, officials determined that since the breach had an immaterial effect on the game, Southport would retain its score and the only penalty would be a free kick and fifty metre penalty, resulting in one Sydney goal. Southport went on to win 14.6 (90) to 5.5. (35).

Following the cessation of the NEAFL in 2020 during the COVID-19 pandemic, Southport were granted entry into an expanded Victorian Football League for the 2021 season.