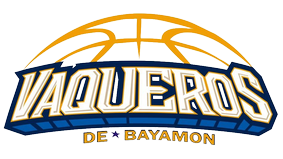 The Vaqueros de Bayamón are a Puerto Rican basketball team of the Baloncesto Superior Nacional based in Bayamón, Puerto Rico. The Vaqueros play their home games at Rubén Rodríguez Coliseum, a venue shared with the Liga de Voleibol Superior Femenino women's volleyball team Vaqueras de Bayamón. The Vaqueros are the most successful team in the history of the Baloncesto Superior Nacional, having won 15 league championships, their last being in 2020.

The franchise began in 1930 and still stands as one of the league's original clubs. Led by Rubén Rodríguez, Bayamón established a BSN record for most consecutive championships with 5, from 1971 to 1975. After losing in the 2001, 2002 and 2005 BSN Finals, the Vaqueros won their record fourteenth championship by defeating the Piratas de Quebradillas for the 2009 title, their first in 13 years.

In December 2020, the Vaqueros won their 15th championship and first in eleven years, winning the tournament that was held inside a bubble due to the COVID-19 outbreak.

Among other records, the Vaqueros hold the record for most games won in a BSN season, 29 of them, set during the 1993 season.